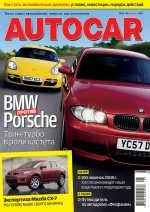 Autocar is the oldest automobile edition that celebrated its 110 years anniversary in 2005. More then six million of readers made their choice in favor of the most competent opinion. Autocar proves to be for them at once the primary source and the last instance with the impeccable reputation.

Ukrainian Autocar is already one year old. The number of one copy readers reached 25 thousand of people only during the first six months. The car test program was started in the intricate local conditions and became the weighty achievement of the Ukrainian editorial stuff.

We offer to our readers: the freshest news; the possibility to get acquainted with the foreign technologies of product development and promotion; the information concerning the cars that are not yet present on the Ukrainian market; the just tests and verdicts of the car including the clear description of weak and strong points and a lot more of other information. The magazine authors are united by the comprehensive knowledge of their business and infinite love to the automobile.